When I first heard about MadCap Flare, it was sold to me as an alternative to Microsoft Word. I’d used Word for decades and was known as the Word guru in every organization I worked with. But the truth was, I had outgrown Word. We’d silently been on the outs for a while, with the occasional outburst on my part when bullets inexplicably went awry. I was hanging on to what everyone else could see was a dead-end relationship. By contrast, MadCap Flare is a content management system that makes things like lists and sections, and styles just seem easy. It is a glamorous program, sexy and deep. No yelling, no fighting, both of us on the same page.

I tried. Lord knows, I tried. I would edit a list, and bullets would end up way down at the end of the topic. I would float an image to the right, and everything after it moved right too. I’d try to make spacing consistent between sections, and they would look even worse. And I would blame Flare – “This stupid program just complicates everything!” – and go running back to Word. But that wasn’t the real disappointment. The real disappointment was with myself. I was used to just opening a program and mastering it (okay, maybe not mastering, but having a working knowledge of it) within a few hours. But with Flare, I had to come to the realization that I was the problem. I just wasn’t good enough for Flare. I would have to reprogram myself if I wanted to stay in this relationship (starting with learning what “float an image” means).

I started with one concept, the one that had been my pain point way back when I was going steady with Word: bullets (or lists, for the documentation professional). Which meant I needed to learn CSS and how it worked with Flare to create both the look and functionality of the documents I wanted to create. Once I mastered lists, it was on to tables, and from there, to mastering HTML output. I played with conditions and snippets and variables. I went from calling MadCap support begging for help to being the first stop for other tech writers when they needed assistance. I went from knowing so little that I couldn’t even participate in a training class to designing custom training for our clients. In other words, I became the Flare guru. And that’s a lot sexier than being a Word guru. Because let’s face it, everyone knows Word now. Kids are learning it in grade school. It’s become, well, a bit of a tramp.

In the commitment stage, you feel comfortable with your decision. You think back to Stage 1, the attraction stage, and you don’t even want that anymore, because that would mean starting all over just to get that sense of newness again. I don’t need to do that – Flare gives me what I want and need, yet still feels exciting, with regular updates and the occasional client challenge to make something that doesn’t look like it came from a content management system. For me, Flare is still glamorous, sexy, and deep. 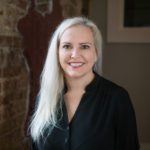 Senior Technical Writer and Account Manager at the White Deer Group. Kathy's deft touch can be seen on our most complex projects.